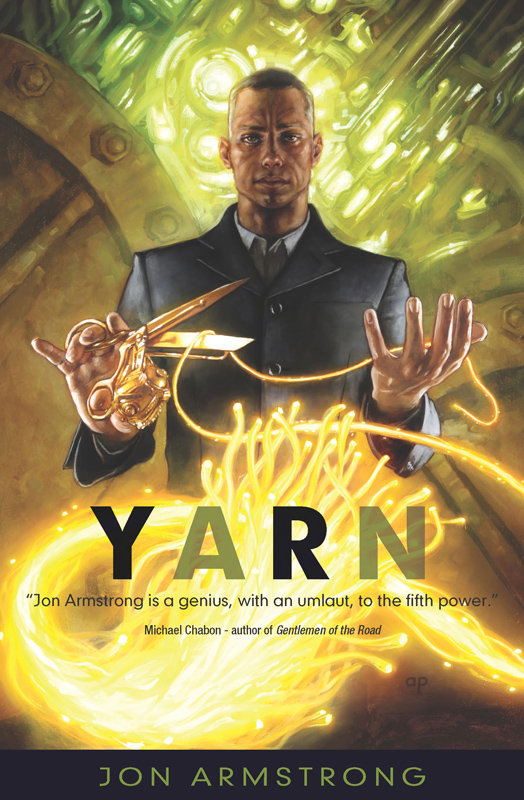 I woke early, suffocated by a sweaty and prickling sense of apprehension — exactly the feeling of wool against the skin on a warm day. Yet there, in the dark of my bedroom, the sun seemed impossibly far away. What had set this fear in my veins? None of my current design projects were so difficult or important. I was using a new half-micron twill for a suit, but I had tested the fabric extensively and knew its properties. And though the motor-driven ball gown we were creating was complicated, my assistant and I had spent a whole day installing the mechanics and testing it again and again. No, those projects were essentially complete, and I felt good about their look, materials, and function.

It was no use. Neither sleep nor an answer was forthcoming. I rose, wrapped in swirling unease, and prepared for the day. It was still dark as I drove through the obsidian and gold towers of Ros Begas to the studio. And as I walked the two hundred meter metal and wood meditation and exhibition entry hallway that spiraled in from the building entrance to my showroom front door, I went over the fashion consultations I had scheduled for the day, the calls I needed to make to suppliers, the fabric tests I needed to run, and the gathering swarm of details for an upcoming show. In the hallway, I powered-on the fashion exhibits that I had on display: including two fabric bursting automatons and a pilling analysis machine, and stooped to collect a few dust fibers on the dark wood floor.

At the end of the spiral, I paused at a display that held the yarn I had gotten from my father. It rested on black velvet and was lit with a single hetrojunction crystal, which bathed the thread with a warm, otherworldly glow, recalling the dawn when I’d pulled this strand from my father’s pocket so many years ago. But my memories could no linger because someone or something was lurking beyond the next curve, near the showroom doors.

Peeking around the last swell of the wall, I saw a figure draped head-to-toe with dark fabric — the weave was a deep dark charcoal green, with the slight sheen like L-flax — a fiber I never used. While it wasn’t completely unusual for someone to come unannounced, the hour and the dress were suspect. Tentatively, I stepped forward, waiting for the visitor to move or speak. At ten feet away, I stopped and as the milliseconds ticked by in silence, began to fear that this was some sort of an attack, that this laundry pile covered an assassin. But even as I catalogued the properties of my jacket, titled Water Hold #11, with both fluid dynamics and charged particle closures, and thought how I might use it to defend myself, my fear seemed misplaced and wrong. I wet my lips. “The showroom is by appointment only.”

The head turned slightly. The voice that emerged was tatty and frail. “I lived a fool’s life and will come to a fools end, but I’ve come to ask a favor.”

The skin on my neck and back puckered with goosebumps. “Vada!” The heels of my Celine-Audis clapped percussive notes on the polished wood. “I never thought I’d see you again. Where have you been? What happened? What are you wearing?”

“Armstrong’s stand-alone prequel to his 2007 debut, Grey, is set in the same superficial, dystopic near-future ruled by fashion and consumerism. Cities like Seattlehama are towering bastions of “sex and shopping” where “saleswarriors” and “salessoldiers” battle for customers. Most people live in the sprawling agricultural areas called slubs. Tane Cedar, one of the world’s top fashion designers, is confounded when his former lover Vada, a fugitive revolutionary, inexplicably appears near death in his showroom and asks him to complete the impossible task of finding illegal yarn and making a coat of it in just one day. Tane’s quest confronts him with the tyranny and hopelessness of the world outside of the cities while answering his questions about his nightmarish childhood and enigmatic father. Armstrong’s stylized tale is a profoundly moving fusion of visionary images and compelling social commentary.”

or Barnes and Nobel.